With the program HertzWin you can calculate Hertz point and line contacts. The influence of a tangential load can also be calculated. HertzWin has been available online for free since March 2009.

In older releases of HertzWin (prior to release 3.1.2) a general approximation formula was used. From release 3.2.0 (December 2020), the situation with gross slip between both bodies can be calculated in detail in HertzWin. This can be done for a circular point contact and for a line contact. You can find an overview of the formulas used in the program’s help function.

In the figure below, the old approximation in HertzWin is plotted against the coefficient of friction, together with the new, exact method in HertzWin. The vertical axis shows the Von Mises (vM) stress in relation to the maximum compressive stress (σHz): vM/σHz. The clearly visible sudden change in the slope of the blue line is the point where the maximum Von Mises stress shifts to the surface. 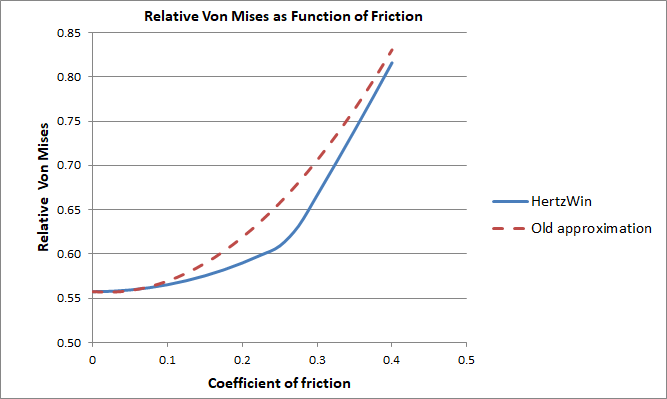 The calculation of a (Hertz) point or line contact that is loaded with a tangential load is usually divided into three different situations:

When applying a tangential load, a coupling (dependency) with the normal load is created. The calculation is therefore based on the following:

Assuming that the (Amonton) law of friction holds at any point on the contact surface, the local tangential force Q(x) (stress) at the surface is given by the following function.

With μ the coefficient of friction. This distribution is used in calculating the effect of gross slip. The next figure shows how the actual force distribution looks like when a tangential force is present.

Calculations with a tangential force on an elliptical contact are currently not (yet) possible in HertzWin. However, it appears that the differences between a circular contact and a line contact are not very great, see ‘Rough Contact Between Elastically and Geometrically Identical Curved Bodies‘ by Bryant and Keer. If the contact is highly elliptical, the results of a line contact with the same Hertzian compressive stress can be used. When the contact is close to circular, the results for a circular contact area can be used. Two extreme examples, both with: Young’s modulus of 200 GPa, Poisson ratio 0.3 and a coefficient of friction of 0.2:

Between this line contact and the point contact there is a difference of less than 10% for the Von Mises and less than 20% for the tensile stress. Entirely in accordance with the conclusions in Bryant and Keer‘s article. The stresses for an elliptical contact will be in between these results. The direction of the tangential load in an elliptical contact is parallel to the minor (minor) axis ‘b’. If the tangential force is parallel to the major axis ‘a’, errors in estimation can be large.

The material stresses below the contact surface are calculated in HertzWin and the main stresses (shear stress, Von Mises and tensile stress) are displayed in the main window. For more insight into the material stresses you can create contour plots via the graphs button. Below is an example of such a contour plot for a circular point contact with a Poisson ratio of 0.3 and a friction coefficient of 0.2. 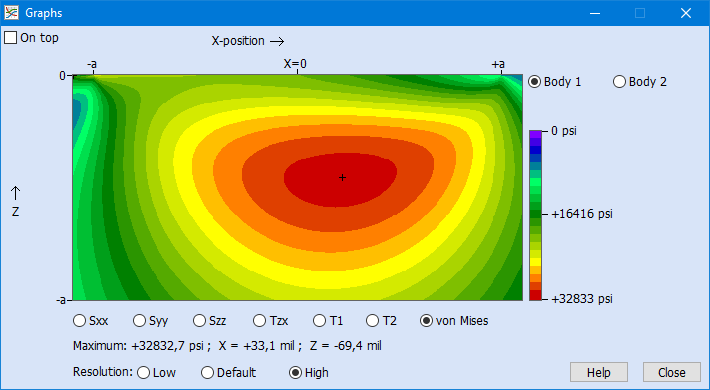 As the tangential load increases, the location where the maximum Von Mises stress occurs, slowly shifts towards the surface. The video below shows the progress with a sliding cilinder (line contact) and increasing coefficient of friction.