In the article Worst-case Tolerance Stack-up Analysis you read about the worst-case or linear stack-up analysis. Such an analysis assumes that all dimensions in the tolerance chain have worst-case deviations form their nominal value. A statistical tolerance stack-up analysis takes the probability of a tolerance value and the combination of tolerances into account. It turns out that the probability of a worst-case combination is negligible for already a small number of parts. Let’s take a look at the following example.
Suppose that you make a stack of 4 identical parts and you want to analyze the total height of the stack. The parts have a height specification of 10 +/-1. Now assume that all the parts have a worst-case deviation and are either 9 (part ‘9’) or 11 (part ’11’) high (any dimension, mm, inch, meter, et cetera). With just 4 parts it is still doable to write down all possible combinations. 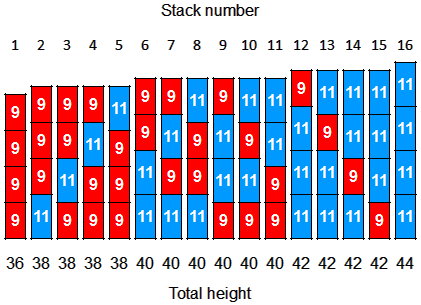 It is clear that it is beneficial to take the probability distribution of tolerances into account and perform a statistical analysis.

Contents of this article

In the worst-case example above there was an extreme distribution of tolerances. The question now is what a (more) realistic distribution is. That question is not that easy to answer but a better estimate would increase the accuracy of your analysis.

When similar parts have been produced already, you have important data at hand to make a good estimation of the tolerance distribution. But what if you’re working on a new product and you don’t have this kind of data for comparison at hand?

A widely used method for performing a statistical stack-up tolerance analysis is the root-sum-squares (RSS) method. Variances (the standard deviation is the square root of variance) can be added. And that makes it easy to add up normal distributed tolerances: Ttot = √(T12 + T22 + …. Tn2).

In a next article I will discuss how realistic a normal (Gaussian) distribution is.