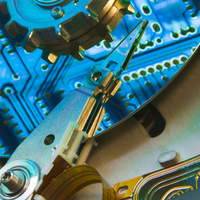 Of course first time right is the goal of a new development. The preliminary phase of concept design, drafting specifications and conducting the required analysis will bring you close to this goal.

But it is still efficient to qualify the final performance of the design. This will avoid problems or quick adaptions to the design when production has already started.

Keywords: concept design, design specifications, production specifications, qualification, bonding
The level sensor is one of the sub-systems in ASML’s wafer scanners and steppers. The level sensor is a measuring system that is used for focusing of the wafer. Tighter focusing accuracy requirements led to the development of this new sensor. Several concept design studies, as well as mechanical analyses, were conducted. Opto-mechanical design, construction and adjustment specifications were also drafted. Test and qualification plans were drafted and performed.

Keywords: opto-mechanics, stability, specifications, adjustment procedures, software procedures, qualification procedures
The level sensor is one of the sub-systems in ASML’s wafer scanners and steppers. The level sensor is a measuring system that is used for focusing of the wafer. This redesign project involved conducting a preliminary study to derive revised specifications for improved focus measurement system performance. In addition to these specifications, test and qualification plans were also drafted.

Keywords: forces, budgets, qualification, specifications
The wafer stage is one of the sub-systems in ASML’s wafer scanners and steppers. A wafer stage positions the wafer while integrated circuits (ICs) are being exposed. New specifications were drafted for all air bearings as part of this wafer stage redesign project. Bearing forces were analyzed during a preliminary study and then all variables were fine-tuned to arrive at an optimal balance between air usage, bearing force and air gap. Qualification of the first prototype bearings was performed using a separate test bed, as well as after integration into a wafer stage.